The orchestra has grown rapidly since it was founded in November 2002 by a group of local amateur musicians who wanted to provide an opportunity for local enthusiasts  to play together in an ensemble and as a way for young people to gain their first experiences of orchestral playing. The orchestra performed its inaugural concert in 2003, shortly followed by its debut at the Thornbury Arts Festival in May 2004: “An impressive performance from this new orchestra” was how one festival reviewer described the orchestra’s achievement. The ensemble also aims to give composers from the region the chance to have their works performed in public; at its sell-out concert in December 2007 the group played an excerpt from a piece by local composer Trevor Jones and in 2011 the Orchestra ran the 'To Compose' competition which gave local composers the opportunity to write music for the Orchestra. 'To Compose' compositions have been included in the programmes for most of the Orchestra's concerts in 2011 through to 2013.
The orchestra now draws players from across South Gloucestershire and beyond and includes musicians of all ages and from all walks of life.
The group rehearses regularly on Wednesday evenings at the United Reformed Church in Thornbury and performs two to three concerts a year, often in support of local charities.
The orchestra does not hold formal auditions but players need to be of a good standard and wishing to improve. If you would like to join Thornbury Orchestra please contact us.
The orchestra welcomes approaches from anyone who would like to use it for charity fundraising. 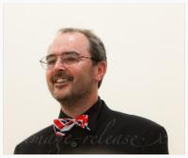 Chris Hill has conducted us since January 2003. Under his leadership the orchestra has grown from a chamber orchestra to a full symphony orchestra with significant forces that many other groups are envious of. Chris is a Fellow of the Institution of Mechanical Engineers but since his retirement he has concentrated on music in many forms. He currently leads a Cello Octet (The Celli Peppers), plays in the POET string quartet and runs various little projects to give musicians a chance to perform works that are not in the normal repertoire. He is an advocate of modern music, particularly from local composers, instigating the tradition in Thornbury Orchestra of playing a local contemporary piece in each concert.

Chris studied cello with Joy Hall, George Issac, Christopher Bunting and in masterclasses with Paul Tortelier. As a cellist he has been both a recitalist and concerto soloist. Whilst at Lancaster he was able to study with Edward Cowie and was a frequent basso continuo player for Ian Hare and Richard Langham-Smith. Chris started conducting whilst at school, organising and leading music groups to explore a wide range of music. Having been lucky enough to play under many eminent conductors, his conducting is mainly self-taught but, since his retirement from engineering, he is immensely grateful for the help he has received from his conducting coach, Huw Gareth Williams. More unusually, Chris twice recorded for BBC Manchester’s Folkweave programme as part of the group Crook Fingered Jack and also featured on their CD, Beggar Boy of the North.

Together with the music committee, he programmes concerts to reflect popular works, and seeks out interesting pieces which deserve more exposure. Chris now conducts the Thornbury Chamber Players, performing in smaller venues that Thornbury Orchestra has now out-grown. He also organises the annual Big Cello Day, which brings together 50 to 60 cellists of all ages. To meet the demands of these groups Chris also arranges music and may yet find time to compose…..

Fun fact – Chris once played the accordion upside down for a whole Ceilidh without realising. 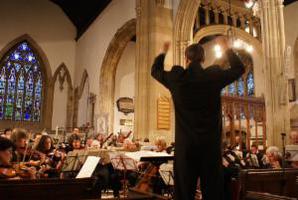 The orchestra is always keen to hear from players who are interested in joining us. For more details click here.

If you would like to know more about our concerts and special events then sign up for our newsletter.